Everyone supposes to know what yogurt is and normally the only thing that we are interested in when in a supermarket, deciding which one to choose, is the flavour. The today's market with yogurts has grown so much in the recent decades that we really cannot complain about different perefered tastes. 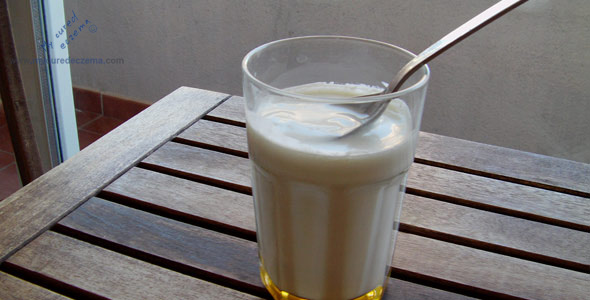 You like strawberries - there you have strawberry yougurt, you love the fresh taste of apricots - no problem, a whole range of apricot yogurts is waiting on you made by different brands. There's literally a yougurt for almost all kinds of fruits, nuts, etc. and if not, you can bet that it will in the near future. To be honest, I have normally never liked these types of yogurts, except the ones where I could find some whole pieces of fruits. That really makes it more tasty for me. My preference has always been a chocolate, or vanilla yogurt.

I especially love the foam types of yogurts and also ones of really a hard creamy texture and consistence. These's have served to me as special deserts since I was a kid and I still cannot get enough. I also love to make my own yogurts with reallly strong base flavors (either one spoon of honey or 100% pure cacao [cocoa] powder) and then I simply throw in some serious amount of shredded coco, toasted almonds and finally sprinkling with flax seeds. To add a sweet flavor, I use stevia instead of a regular sugar. About one spoon of Stevia finalizes this perfcest and yammyy desert. I also made a video on how I make it, so don't hesitate to check out my super-chocolate yogurt if interested.

Can yogurt help my eczema?

A lot of people with eczema experience positive effects and partial relief when taking yogurts internally or topically applying on the affected skin. Yogurt is basically a living world of beneficial bacteria where different strains and amounts of them are responsible for a pretty wide range of taste and flavor. If you buy a yogurt in a regular supermarket, it usually contains just on or two strains of Lactobacilli and bifidobacteria (usually Lactobacillus delbrueckii subsp. bulgaricus and Bifidobacterium breve ). However there are dozens of other lacto-fermenting bacteria, which can be added to variate yogurt's properties.

Just as a curiosity, the names comes from Turkish: yoğurt, which means coagulated, or thickened. Yogurt has as you can expect a long history but the first one to describe the microflora a little bit more in details seems to be the Bulgarian student Stamen Grigorov in 1905. More specifically, he was studying the traditional Bulgarian yogurt (hence the part of the Lactobacillus strain - bulgaricus), which was later considered to be the reason of exceptionally good health among its regular consumers.