It's a name of a fermented milk by kefir grains and has a long history. It comes from Caucacus Mountains more than 3,000 BC and is well known for its ability to sooth eczema of all types. Although at first sight you cannot distinguish it from a regular yogurt, it has some significant differences. Not so much in taste but certainly in the composition. 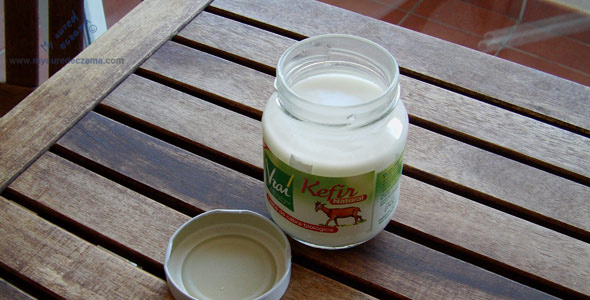 The quality of this precious drink depends on the milk (raw or pasteurized), and the kefir grains (starter) viability, although nowadays factories use the so-called kefir mild instead, which is simply a mixture of different bacteria and yeast charasteristic for kefir. Additionaly it contains a water-soluble polysaccharide known as kefiran , fermentation products (carbon dioxide and alcohol), quality nutrients (proteins and polysaccharide), a whole range of vitamins (A, B1, B2, B6, D, K2 and more) and also minerals such as calcium, iron and iodine.

Units count of microbes in a gram of the grain

Here are some simple and quick recipes. The usual process of fermenation is at ambient temperatures and I'd recommend anywhere from 23 to maximum 30ºC (73-86ºF) for optimal cultivation of most bacteria inside. Always try to maintain the same temperature during the whole fermentation process (about 24 hours), although it's just a detail, it adds to the quality of the final product. You might have also hear of Water kefir (or tibicos), which is a bit different in composition. It's grown in water with sugar or dry fruit such as figs, and lemon juice.

While yogurt contains a few strains of Lactobacillus and Bifidobacterium bacteria, kefir dispones of several additional major strains of beneficial bacteria such as Lactobacillus Caucasus, Leuconostoc, Acetobacter species, and Streptococcus species and can colonize our intestinal tract. In addition it contains important yeasts (Saccharomyces kefir and Torula kefir) that control and eliminate destructive pathogenic yeasts and overally makes our intestines more resistant.