A lot of people say that taking probiotics has had some very positive effects on their eczema problems. What could be the reason behind that? To find the answer let's first have a look at what probiotics actually really are. 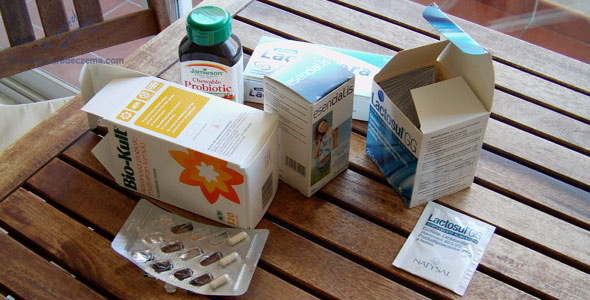 The term probiotic comes from the Latin preposition pro ("for") and the Greek adjective βιωτικός (biotic), the latter deriving from the noun βίος (bios, "life"). Now you might notice that there is also another very common used word similar to this one, which is antibiotics and it's the complete opposite - "against life". Antibiotics if applied properly can save lives, however they usually don't kill only bad bacteria but also the good one. That's why you should take with them also probiotics or foods with probiotic cultures to avoid the bacteria in your digestive system getting out of balance.

Recently, I've read a lot on this topic and about our microflora and came to the conclusion that it is one of the most important parts of our immune system. But that's nothing new and already Hippocrates (460 – 370 B.C.), an ancient Greek physician and one of the greatest persons in all the history of medicine said: "All diseases begin in the gut". There is also another good example: Philippe Pinel, father of the modern medicine, after his long carrier in the 1800 concluded that psychiatric disorders are born in the stomach and the reagon of abdomen.

So it doesn't matter if you are a baby, toddler or an adult, it is always important to strengthen your microflora (for example with probiotics). The good news is that they can be usually taken during pregnancy or breastfeeding without any worries at all, but always read the instructions and warnings in the box anyway just to be sure. Another thing to mention is that eczema treatment with probiotics can sometimes have a so-called die-off effect.

So now that we understand that the balance of our bacterial microflora is really important, let's have a closer look at probiotics. There's a lot of types and the basic differences are based on:

1.) the number of active micro-organisms - a good probiotic should have anywhere from 2 - 15 billions of good bacteria. The pills, capsules or sacks are specially fabricated to assure the maximum life duration possible. Basically they have to prevent it from high temperatures and the air.

3.) with added prebiotics - They are basically a food for bacteria. In more details they consists of Fructo-oligosaccharides (FOS) and inulin, which are types of fructo-polysaccharides comprised of glucose-fructose. They are indigestible by our bodies and get directly to the large intestine where they feed bacteria and promote fermentation.

Division based on histamine reactions

Histamine is an organic nitrogenous compound involved in local immune responses as well as regulating physiological function in the gut and acting as a neurotransmitter. It causes many of the symptoms of allergies, such as a runny nose or sneezing. When a person is allergic to a particular substance, such as a food or dust, the immune system mistakenly believes that this usually harmless substance is actually harmful to the body. In an attempt to protect the body, the immune system starts a chain reaction that prompts some of the body's cells to release histamine and other chemicals into the bloodstream.

The histamine then acts on person's eyes, nose, throat, lungs, skin, or gastrointestinal tract, causing allergy symptoms. You've probably heard of antihistamine medications - these help to fight symptoms caused by the release of histamine during an allergic reaction. Histamine is also present in many foods. Bacterias also affect the level of histamine in our body, that's why when treating eczema, it's sometimes good to take a closer look on this subject. This is how we can divide the probiotic bacteria:

There are some studies and user experiences that show a significant improvement in eczema while taking especially the strain Lactobacillus plantarum. Having said that, don't overdo it with any strain - obviously, here also applies the rule that everything should be in balance.